What a fantastic series going through Lamentations was! Chalese, Derrick and Marc did such a remarkable job with such a difficult book. Well done!!

Now that we hit the end of the book, you may be wondering, “What happened next?” Our theme verse was, ‘there may yet be hope.”(Lam. 3:29) Was that hope justified?

The answer is…absolutely! In fact, let me get ahead of myself and give you the ending right up front.

What happened next to the Israelites shows us that even when God allows the consequences of our sin to discipline us, He always does it in a way that results for our own good. In addition, when we find life taking us where we didn’t expect we would be going, who knows, this may be God’s plan to that will ultimately result in our good.

Here is the bottom line – we can have hope no matter what. If the Israelites can have hope in the midst of all of this, how much more can we. Let me tell you why.

Exile is what happened next. The people of Judah were carted off to Babylon. In fact, most of them were already there when Jeremiah was describing what he saw in the aftermath of the fall of Jerusalem.

Here is what has always mystified me about this whole event – God wanted the Israelites to go to Babylon and not stay in Jerusalem. To me it seems like the courageous and even holy thing for them to do would have been to resist exile and stay in Jerusalem. That was not the case.

Let’s take a giant step back.

The Old Covenant (or Testament) God made with Israel was a covenant of blessings and curses. If you obeyed the laws of the covenant (think Moses and the Ten Commandments as a start), God would bless you. If you disobeyed, God would curse you. A summary of these blessings and curses can be found in Deuteronomy 28-29 and would be beneficial for you to read. One thing they did to “cut” this covenant was to literally cut a sacrificial animal in two, separate the two halves and then walk through between the two. As they did that, they declared that the same thing should happen to the person who breaks the covenant. YIKES!

As we know, they broke this covenant countless times in every way, especially breaking the first commandment and worshipping other gods. What was God to do?

In 722 BC, Israel was conquered by the Assyrians. The way the Assyrians established their rule was to cart off half of the conquered people to exile, and then bring in their own people to replace them. The resulting intermingling and intermarriage would dilute the desire to resist their conquers. And that is exactly what happened here, with the Northern Kingdom Israelites becoming what the Southern Kingdom considered “half breeds.” These half breeds ultimately became known as “the Samaritans” who were despised in Jesus’ day.

Then over a century later, in 586 BC, the Babylonians under King Nebuchadnezzar, laid siege to Jerusalem and totally destroyed it.

Now as this was unfolding God raised up prophets like Isaiah to warn people to repent of their sin. Then comes Jeremiah, saying the same thing. But interestingly, in addition to warning of the fall of the kingdom, Jeremiah starts speaking of a coming exile.

“For twenty-three years, from the thirteenth year of King Josiah son of Amon of Judah, to this day, the word of the Lord has come to me, and I have spoken persistently to you, but you have not listened. And though the Lord persistently sent you all his servants the prophets, you have neither listened nor inclined your ears to hear when they said, “Turn now, every one of you, from your evil way and wicked doings, and you will remain upon the land that the Lord has given to you and your ancestors from of old and forever; do not go after other gods to serve and worship them, and do not provoke me to anger with the work of your hands. Then I will do you no harm.” Yet you did not listen to me, says the Lord, and so you have provoked me to anger with the work of your hands to your own harm. Therefore thus says the Lord of hosts: Because you have not obeyed my words,  I am going to send for all the tribes of the north, says the Lord, even for King Nebuchadnezzar of Babylon, my servant, and I will bring them against this land and its inhabitants, and against all these nations around; I will utterly destroy them, and make them an object of horror and of hissing, and an everlasting disgrace. And I will banish from them the sound of mirth and the sound of gladness, the voice of the bridegroom and the voice of the bride, the sound of the millstones and the light of the lamp. This whole land shall become a ruin and a waste, and these nations shall serve the king of Babylon seventy years.”
Jeremiah 25:3-14

Now here is where it gets weird.

Over time, Jeremiah tells them this exile is part of God’s plan and it will ultimately result in their good. Going is good, and staying is bad.

Sure enough, those who went to Babylon ended up far better off than those who stayed in Jerusalem. Indeed, God worked powerfully in their midst while they were in Babylon. Remember Daniel in the lion’s den? Shadrach, Meshach and Abednego in the fiery furnace? Those miracles took place during the exile to Babylon.

Which brings us to my main point.

When the Israelites were carted away to Babylon, they were far from God and in bondage to all sorts of sin. When they returned to Jerusalem in 537 BC, they had been set free from that bondage and were back on track with God. A spiritual cleansing if you will. (We saw the results of that in our Rebuilding the Wall series Pastor Derrick just preached on.)

We read this in gotquestions.org- “The Babylonian captivity had one very significant impact on the nation of Israel when it returned to the land—it would never again be corrupted by the idolatry and false gods of the surrounding nations. A revival among Jews took place after the return of the Jews to Israel and the rebuilding of the temple. We see those accounts in Ezra and Nehemiah as the nation would once again return to the God who had delivered them from their enemies.”

So, let me repeat what I said up front – Even when God allows the consequences of our sin to discipline us, he always does that in a way that it is for our own good. Especially now that we are under the New Covenant. In addition, when we find life taking us where we didn’t expect to be going, who knows, this may be God’s plan that will ultimately result in our good. As horrible as this may sound, God can even turn physical suffering into our own good by causing it to set us free from sin.

The Apostle Peter said this: “Therefore, since Christ suffered in his body, arm yourselves also with the same attitude, because whoever suffers in the body is done with sin.”
1 Peter 4:1

I have experienced this truth in my own life over the years.

Here is the bottom line – We can have hope no matter what. If the Israelites can have hope in the midst of all of this, how much more can we. Through faith in Jesus, we are adopted children of a gracious and merciful God, who loves us unconditionally. He will ultimately turn the bad things in your life into good (Romans 8:28).

KEEP UP WITH US
EVENTS 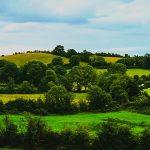 Psalm 23: In My Own WordsMakers Life, Weekly Rhythms